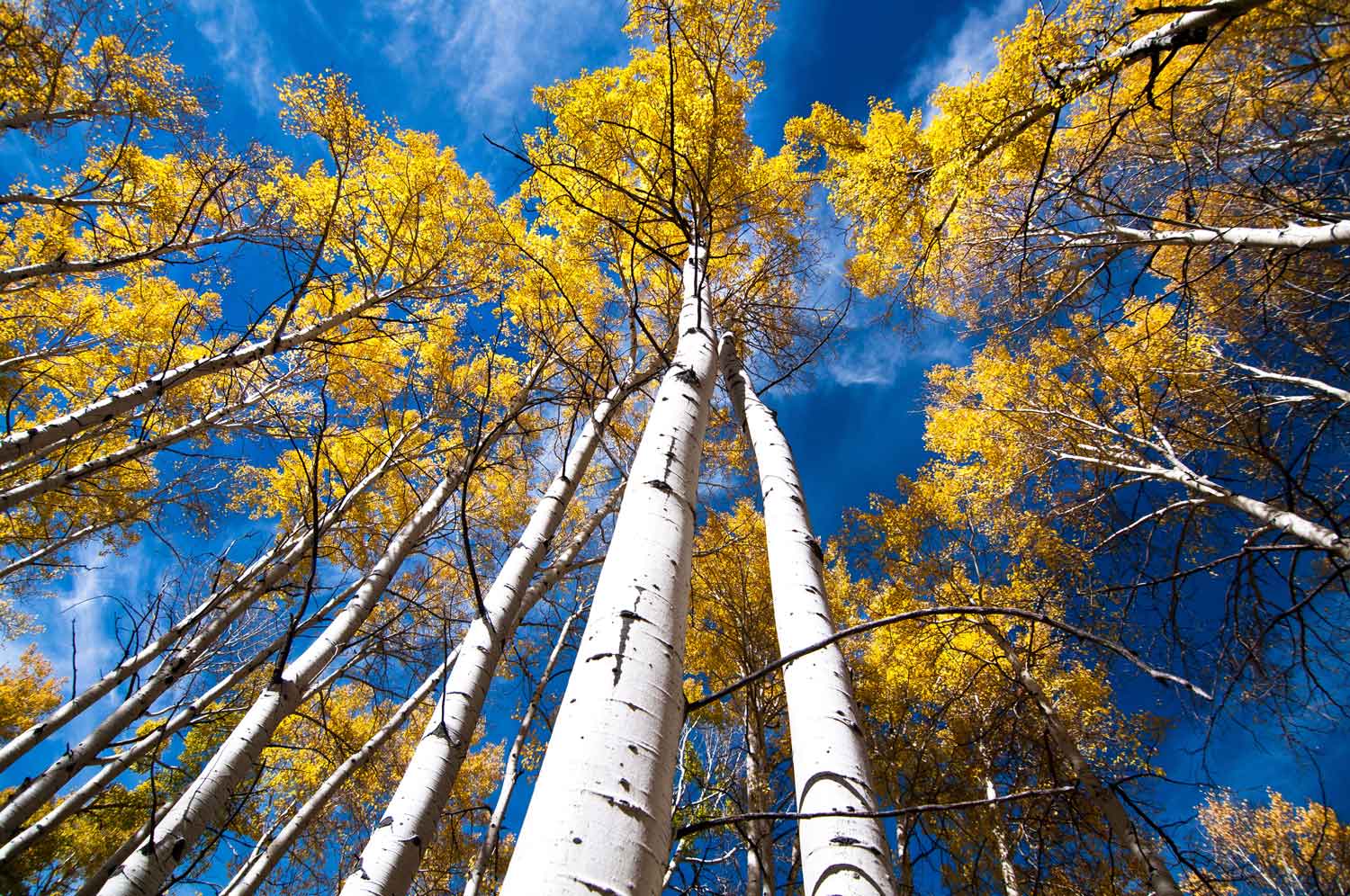 Something mysterious awaits in the aspen grove at Fishlake National Park, Utah. Crowned with the formidable title of the world’s largest known living organism, the “Trembling Giant” hides in plain sight and makes its presence known by nothing more than a whisper of leaves…because that is just what it is. This enigma is Pando, the forest itself, a single gigantic being composed of trees whose ancient root network spans 106 acres. How is this possible? The secret lies with the aspen trees.

With their smooth white bark, dramatic black markings, and tall, thin trunks, aspens are some of the most picturesque and graceful trees. Beyond their beauty, special varieties also possess a very surprising quality. Each separate tree standing above the ground is actually part of one single, enormous plant. The real life of these trees is in the roots, which can span tens of acres. The aspen “trees” are simply the shoots that spring from these roots when conditions are right and there is enough sunlight to sustain them. This asexual reproductive process is called “suckering.” So, what you may see as an entire forest of hundreds of trees is actually, more accurately, one gigantic tree!

The interlocked aspen trees of Pando are a variety called quaking aspen, so named because of their tendency to rustle at the slightest breeze. The discovery of the famous forest is credited to Burton V. Barnes of the University of Michigan in the 1970s. In addition, according to ecologist Paul Rogers of Utah State University, Pando is a “he.” Aspens actually do come in two sexes and Pando is definitely male. He was named for a Latin word meaning “I spread,” and the name is very apt. Each of the 47,000 or so trees is a genetically identical clone spreading from the original root. In 1992, the Organization for Economic Cooperation and Development declared this grove of trees the “world’s most massive organism.” He extends for a huge 43 hectares (a little over 106 acres) and is estimated to weigh about 6,600 tons. This massive footprint is what earns Pando’s reputation for the largest living thing.

How long has Pando been standing? As a reference point, the age of the oldest known non-cloning trees rank in excess of 4,000 years. The remarkable bristlecone pine, Methuselah, standing in Inyo County, California, is 4,847 years old! But even this wise and mighty tree seems young in comparison to the massive Pando. One study put him at roughly 80,000 years old, and some experts say that he could be much more than that—closer to an incredible 1,000,000 years old. This would mean that this remarkable creature has been alive since prehistory or before mankind as we know it even existed. This makes Pando potentially one of the oldest living things as well as the largest.

Sadly, the Trembling Giant is in danger. Pando’s trees are deteriorating from drought, beetles, and fungus-like disease. That by itself is fairly typical of aspen stands, but the trouble is that new trees are not growing. The grove’s reproductive process of asexually replicating itself through cloned offshoots means that it rarely, if ever, produces seeds. Thus, with no new clones appearing, this may be the end of the legendary forest. While there is no conclusive explanation, ecologist Paul Rogers speculates that increased deer and elk in the area may be partially responsible for eating the young aspen shoots. The U.S. Forest Service is planning to try and fence off some of the grove in order to shield it from excess people and animals. As of this year, however, Pando consists mostly of older and dying trees, with almost no new sprouts to replenish the ancient grove. Is the Modern Age proving to be the demise of this vast marvel? Or perhaps this remarkable being has simply reached the end of his days?