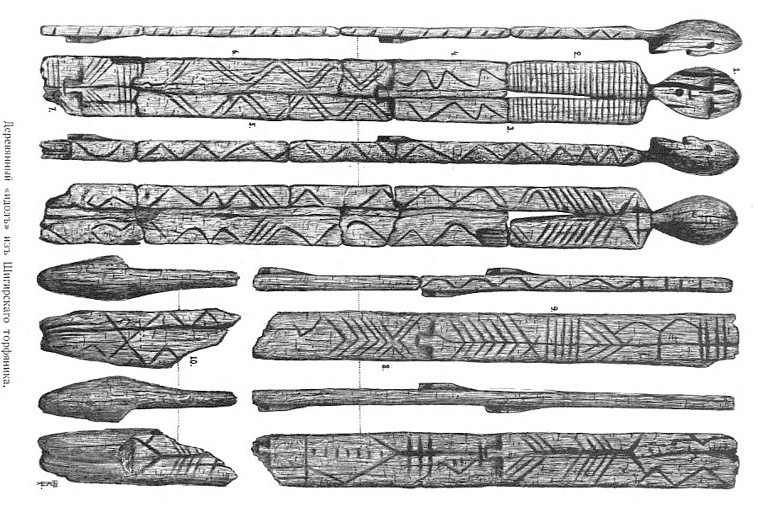 Secrets of the Shigir Idol: The Oldest Wooden Sculpture in the World

Tales by Trees is not the first to prize wood as a material for craft. Wood was first carved into tools and weapons by our earliest ancestors, and later found carved into the well-preserved furnishings of ancient Egyptian tombs. However few wooden artefacts have withstood the test of time for as long as the world’s oldest wooden sculpture, the Shigir Idol.

The Shigir Idol was discovered hidden deep in a peat bog in the Ural Mountains, Russia, back in 1894. Recently dated as being 11,000 years old, it originates right back to the beginning of the Holocene epoch, or the ‘Age of man’, and is twice as old as the Great Pyramids of Giza.

Carved from the timber of an already 156-year-old Larch tree, Shigir Idol was found in fragments and once reassembled, stands 2.8 metres tall. Though according to the drawings of the archaeologist, Vladimir Tolmachev’s, it was likely almost double this height originally! The monumental wood carving features seven faces, one three-dimensional up the top and six others etched into the body of the piece. Alongside its many faces are a series of horizontal and diagonal lines and abstract shapes, chevrons and a herringbone among them. It was clearly marked with a sharp object, which is even thought to have possibly been a sharpened beaver tooth.

Nobody has yet been able to crack the code masterfully carved into the sculpture’s surface, though it’s thought certain that these geometric markings carried meaning for the sculptor. It could be a pictorial map, or have some relation to deities, with some anthropologists suggesting the lines could represent boundaries between the spiritual world and earth. The writing of our ancestors is a mystery to us now but it’s clear they ‘lived in total harmony with the world, had advanced intellectual development, and a complicated spiritual world’. 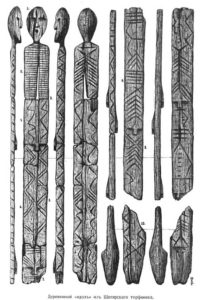 In fact, it’s largely because of the spiritual nature of the object that others of its kind, or, Slavic Idols, are rare. Built from timber as well as stone, to combine ‘the magic force of trees’ with that of sacred deities, Idols were often used in Russian religious practices. During Christian colonialism, however, many of these ‘pagan’ objects were destroyed.

Whilst we can describe the physicality of the Shigir Idol, we can do little to manifest the presence of this ancient relic. Professor Mikhail Zhilin, the lead researcher at the Russian Academy of Sciences’ Institute of Archeology, explains the emotional experience of seeing the sculpture in real life:

‘We study the Idol with a feeling of awe. This is a masterpiece, carrying gigantic emotional value and force. It is a unique sculpture, there is nothing else in the world like this. It is very alive, and very complicated at the same time’.

So why don’t we value the aliveness of wood today as much as we did in the past? Largely, because it became more important to make things affordable and fast. But the need for more sustainable designs has been heard, and they’re abundance is growing – we even have wooden skyscrapers now! If we’re going to have to clear the way for a growing population, we can make sure our buildings still absorb carbon dioxide like the forests before them. It’s clear that wooden artefacts are just as good for our wellbeing as that of the planet.

So we can’t argue the case for wooden objects lasting 11,000 years. Nevertheless, a wooden product will last much longer than a shoddy plastic one but it’s not going to stick around you know, forever, like plastic. And that’s a good thing! Thinking about the incredible historical artifacts we’ve uncovered like the Shigir Idol, shouldn’t we be sure to leave something valuable behind too? Do we really want our time here to be marked by some plastic takeaway forks that refuse to perish?

Let’s get the memo from our ancient ancestors and live in harmony with earth’s resources. So that hopefully, they, too, will still be here in years to come.