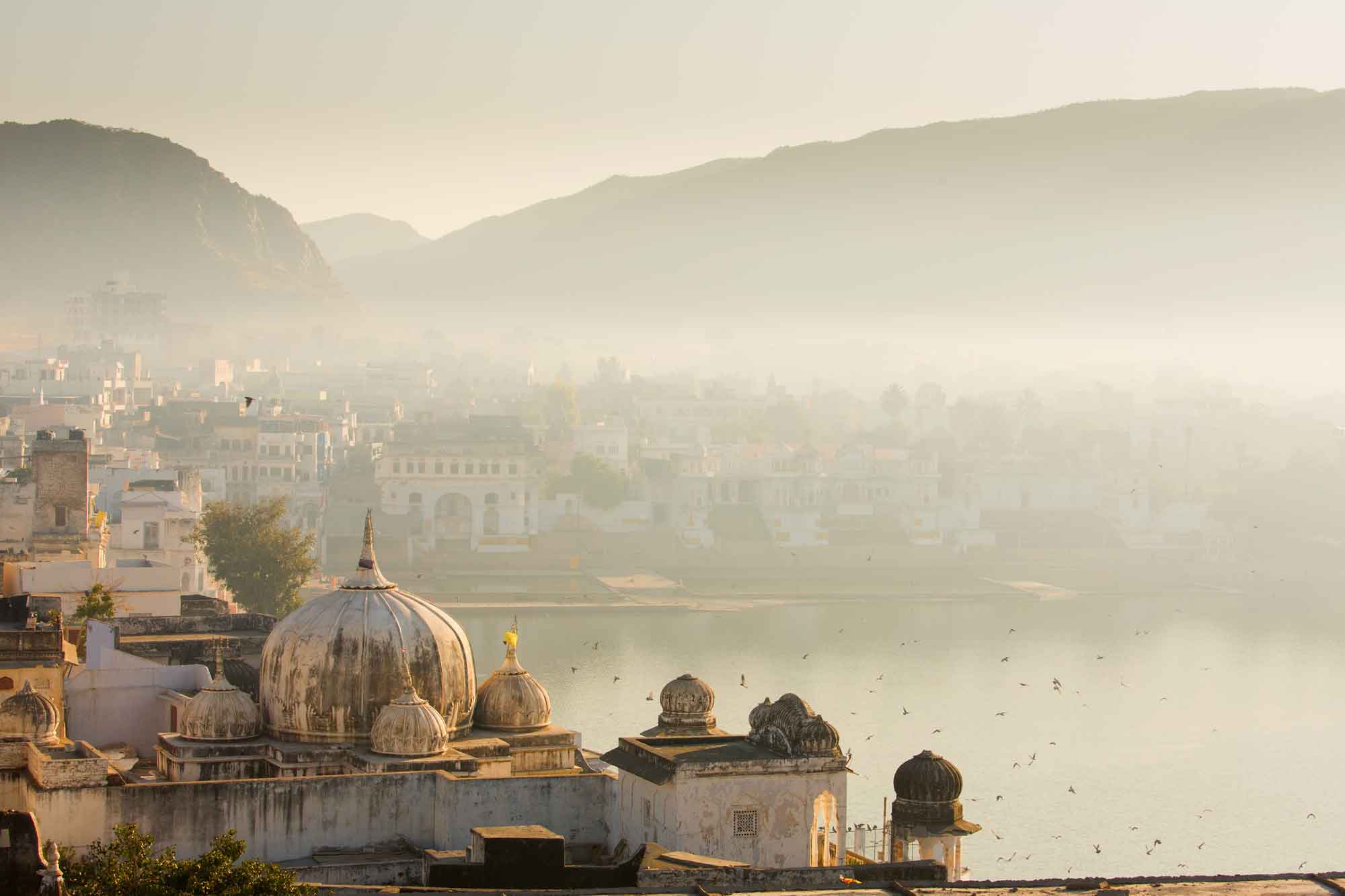 A Brief Guide to The Sacred Trees of India

With a rich, colorful culture, thousands of years of history, and many intertwined religions, India has been called the land of gods and goddesses. In this spiritually charged world, special sacred trees occupy a respected, ceremonial position and some are even worshipped.

The peepul is in the fig family, with curiously heart-shaped leaves that taper off at the point in a small “tail.” Rather mysteriously, the leaves of this tree rustle even when there is no breeze to move them, which is attributed to the long leaf stalk and broad leaf structure. This tree, also known as “Ashvatta,” is purportedly the most worshipped tree in India. Lord Krishna, the original incarnation of Lord Vishnu and the supreme lord of the universe according to the Vaishnava faith, identifies with the peepul in the sacred text Bhagavad Gita. He states, “Of all trees, I am the holy fig tree.” In addition, the Hindus associate the roots of the tree with Lord Brahma (the creator of the universe), the trunk of the tree with Lord Vishnu (the protector and preserver), and the leaves of the tree with Lord Shiva (the destroyer). The Buddhists also revere this tree since Lord Buddha is thought to have attained enlightenment under the peepul tree. Thus it is also called the Bodhi Tree or Tree of Enlightenment. A red thread or cloth is often tied around the tree for worship and it is considered very inauspicious to ever cut one down.

This is actually another type of fig tree, with large, glossy leaves and trunks that appear to be composed of a labyrinth of roots (called “aerial prop roots”). It grows around a host plant, often killing the original tree or plant in the process, earning it the nickname “strangler fig.” The banyan tree often represents the Trimūrti, the three lords of cosmic creation, preservation and destruction—namely, Lord Brahma, Lord Vishnu and Lord Shiva. It is very often used for metaphorical reference in the Vedic scriptures written in ancient Sanskrit. With its ever-spreading roots and branches, it is also symbolic of life and fertility in many Indian cultures and is consequently worshipped by those who wish to have children. The revered banyan tree is never cut, and thus often grows over many acres.

The bael is a slender, aromatic tree that bears a sweet, yellow-green fruit. It is a very medicinal plant as well as a sacred tree. All parts of it are used for different healing purposes—the roots, leaves, and fruits—and it has proven effective in combatting many different kinds of bacteria. It is known as “Sivadruma” by the Hindus, and the leaves are often offered to Lord Shiva, who is known to be particularly pleased by this tree. Baels have trifoliate leaves, i.e. a leaf structure of three, and this is sometimes thought to symbolize Siva’s trident or the Trimūrti (described above) as well.

Ashoka: A Guard Against Grief

This is a small evergreen tree, with dark green leaves and fragrant orange-yellow to deep red flowers. The name of this tree means “without grief” or “one who gives no grief.” Water in which the ashoka flowers have been washed is used as a protective and healing draught against sorrow. It is representative of Kama Deva or the God of Love in the Hindu faith, and thus it is also associated with fertility. In fact, the bark of the tree is used as a remedy for reproductive disorders and to restore fertility. It is also thought that Lord Buddha was himself born under an ashoka tree and so it is often planted in Buddhist monasteries.

The classic appearance of the coconut palm, with its slender trunk, large fan-like leaves, and round hard-shelled fruit, is beloved as a symbol of exotic beaches and tropical forests. In India, however, coconut trees are used for all kinds of religious purposes, mainly utilizing the coconut fruits in puja (religious ceremonies) and all kinds of traditional food preparations. Some say that the fruit represents Lord Shiva, with the three black marks on coconuts depicting his eyes. Around the world, the coconut fruit is well regarded for its distinctive flavor, nutritional benefits and even medicinal value, possessing anti-bacterial properties.

Mango: Icon of Love and Fertility

Mangos can grow exceedingly tall, over 100 feet, and can live hundreds of years. When mature, these trees have dark green leaves and put out small white, sweet-smelling flowers, which eventually ripen into the famous luscious fruit. In India, the mango is commonly seen as a symbol of love and fertility and is used in religious and social ceremonies accordingly. The mango leaves are often strung in a garland and hung over the entrance of a dwelling to mark an auspicious occasion. The Buddhists revere the mango for it is believed that Lord Buddha created a huge mango tree in Shravasti, an Indian district, from a seed. The mellow, sweet flesh of mangos is very popular everywhere for its delicious flavor.

Their huge lush green leaves make it clear that bananas thrive in a very rainforest-like environment. The leaves, fruits and flowers of this tree are all utilized in Indian religious ceremonies. For example, the fruit is offered to various gods and goddesses, especially Lord Vishnu and Sri Lakshmi, the Goddess of Fortune. Banana leaves are used as plates to distribute blessed and offered food, called prasadam. Those of the Hindu faith also worship the banana trees, bearing fruits and flowers, for the welfare of the family. This tree is certainly more than just a household fruit in India.

Neem: A Tree of Healing

Neems are drought-resistant evergreens in the mahogany family, with small tapering leaves and white, fragrant flowers. The flowers and leaves are used in traditional Indian cooking and small preparations of neem are consumed as part of the New Year’s celebration in several provinces. Deities are sometimes garlanded with offerings of neem flowers and leaves. It is greatly respected for its medicinal uses, including anti-bacterial, anti-viral, anti-fungal, and even sedative properties. It is also commonly used as a “toothbrush.” People in India (as well as Africa and the Middle East) have been chewing on neem twigs to clean their teeth for centuries. In Hindi culture, neem is manifested as the Goddess Durga, also known as Parvati (the wife of Shiva). In some parts of India, the neem tree itself is thought to be a goddess, Neemari Devi. It is associated with Goddess Sitala Devi in the north as well as Goddess Marimman in the south, who are both associated with giving and healing of skin ailments like small-pox. The beautiful and famous Jagannatha deities in eastern Odisha are formed from neem wood. Neem flowers, leaves and even smoke from burning the leaves is often used to ward off evil spirits.

These small trees, with glossy green leaves and tiny scarlet flowers, are related to mistletoe and live off the roots of other trees. The harvested wood is yellowish, fine-grained, very aromatic, and, unlike other woods, has the distinction of retaining its prized fragrance for decades. A special paste called “chandanam” created from sandalwood is often used on the body, applied to the head, chest or neck either cosmetically or as part of a religious ceremony. The fragrant and sweet-smelling pastes of sandalwood are also very often used to worship the gods and goddesses. There is an account connected with this tree wherein the Goddess Parvati (Shiva’s wife) created Lord Ganesha out of a sandalwood paste and breathed life into the figure. Sandalwood is also prized by Buddhists who use the scent in their own ceremonies and meditations. It is very often used to purify temples and holy places in both the Hindi and Buddhist faith.

This is a small taste of the relationship between trees and spiritual life in India. The association between many different kinds of trees, plants and flowers with religious practice is a deep and significant one. It is based in a thought system that recognizes that every living thing—including every plant and tree—is an individual personality.